“I believe you should write what you enjoy reading. If you attempt to write something you don’t like, you’ll go mad!” 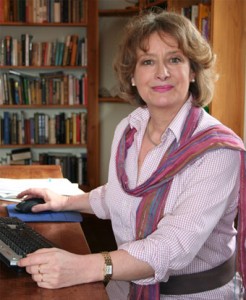 Since 1992, Minette Walters has been captivating readers and critics alike with her psychological novels that explore the dark heart beating below a calm surface. Her unique ability to bring crime ‘uncomfortably close to home’ has earned her the title ‘Queen of British crime fiction’, and her novels have been published in 35 different languages. Her flair for biting dialogue and razor-sharp characterisations have made each of her novels a consistent bestseller around the world.

Never one to follow rules, Minette eschews a series character, preferring instead to have each novel stand on its own. With a readership in the millions, her fans clearly endorse this break from tradition. Minette’s work has also won crime writing’s top awards, including the Crime Writers’ Association John Creasey award for best first novel for The Ice House and the Edgar Allan Poe Award for best crime novel published in America for The Sculptress. Five of her novels have been adapted for television.

Select the book titles or images below to visit the relevant detail page for each book on the website of Minette’s literary agent Jane Gregory at David Higham.

The Swift and the Harrier

When bloody civil war breaks out between the King and Parliament, families and communities across England are riven by different allegiances. A rare few choose neutrality.

The Turn of Midnight

As the year 1349 approaches, the Black Death continues its devastating course across England. In Dorsetshire, the quarantined people of Develish question whether they are the only survivors.

When the Black Death enters England through the port of Melcombe in Dorsetshire in June 1348, no one knows what manner of sickness it is or how it spreads and kills so quickly. The Church cites God as the cause, and religious fear grips the people as they come to believe that the plague is a punishment for wickedness.

‘Muna’s fortunes changed for the better on the day that Mr and Mrs Songoli’s younger son failed to come home from school.’

Before then her bedroom was a dark windowless cellar, her activities confined to cooking and cleaning. She’d grown used to being maltreated by the Songoli family; to being a slave.

She’s never been outside, doesn’t know how to read or write, and cannot speak English.

A body is found in the woods…

Based on the true story of the shocking murder of Mrs Caroline Luard, which took place in Kent in August 1908. Caroline Luard is shot dead in broad daylight in the grounds of a large country estate. With few clues available, her husband soon becomes the suspect…But is he guilty?

When Lieutenant Charles Acland is flown home from Iraq with serious head injuries, he faces not only permanent disfigurement but also an apparent change to his previously outgoing personality. Crippled by migraines, and suspicious of his psychiatrist, he begins to display sporadic bouts of aggression, particularly against women, especially his ex-fiancee who seems unable to accept that the relationship is over. After his injuries prevent his return to the army, he cuts all ties with his former life and moves to London. Alone and unmonitored, he sinks into a private world of guilt and paranoid distrust…until a customer annoys him in a Bermondsey pub…Out of control and only prevented from killing the man by the intervention of a 250-pound female weightlifter called Jackson, he attracts the attention of police who are investigating three ‘gay’ murders in the Bermondsey area which appear to have been motivated by extreme rage…Under suspicion, Acland is forced to confront the real issues behind his isolation. How much control does he have over the dark side of his personality? Do his migraines contribute to his rages? Has he always been the duplicitous chameleon that his ex-fiancee claims? And why – if he hates women – does he look to a woman for help?

Have you ever wanted to bury a secret so deeply that no one will find out about it? With private security firms supplying bodyguards in every theatre of war, who will notice the emergence of a sexual psychopath from the ranks of the mercenaries? Amidst the turmoil of Sierra Leone’s vicious civil war, the brutal murder of five women is of little consequence and no one questions the ‘confessions’ that were beaten out of three child soldiers. Except for Reuters correspondent Connie Burns. After witnessing a savage attack on a prostitute, Connie believes a foreigner’s responsible. She has seen him before, and she suspects he uses the chaos of war to act out sadistic fantasies against women. Two years later in Iraq, the consequences of her second attempt to expose him are devastating. Terrified, degraded and destroyed, she goes into hiding in England where she strikes up a friendship with Jess Derbyshire, a loner whose reclusive nature may well be masking secrets of her own. Seeing parallels between herself and Jess, Connie borrows from the other woman’s strength and makes the hazardous decision to attempt a third unmasking of a serial killer …Knowing he will come looking for her…

Disorderd Minds, explores a possible miscarriage of justice in 1970 when a bullied and retarded 20-year-old, Howard Stamp, was convicted of murdering his grandmother. Because Stamp hanged himself in prison, his case is forgotten until Dr Johnathan Hughes, a 34-year-old author and research fellow in Anthropology, comes across it by accident and includes it in a book. On the face of it there is no similarity between the illiterate Stamp and the highly educated Hughes, but their lives resonate through their damaged childhoods and mutual sense of exclusion. Set against the threat of war in Iraq and the unease it inspires in the UK, DISORDERED MINDS tracks Jonathan’s attempts to prove a grotesque injustice.

Fox Evil, published in 2002, takes readers to Dorset where New Age travellers, under the charismatic leadership of Fox Evil, invade an isolated village. Two women with their own evil intentions dominate the seemingly peaceful village and they have been waging a cruel campaign against a frail neighbour, attempting to drive him to loneliness and despair after his wife dies in mysterious circumstances. But when Fox Evil uses the women’s spitefulness for his own purposes, the villagers realise they have a sadist in their midst.

Acid Row, published in 2001, is a ‘real time’ story about a riot that erupts on a sink estate when a registered paedophile is discovered living near children. Described by reviewers as ‘impossible to put down’, the novel takes the reader through a rollercoaster ride of terror as the estate is blockaded and police lose control. With topical references to Internet child pornography and the controversial debate on whether or not to ‘out’ paedophiles, Minette deftly balances difficult social issues with a fast-paced storyline to create a compulsive read.

The Shape of Snakes

The Shape of Snakes, published in 2000, confirmed Minette’s reputation as a Number 1 bestseller. Her only first person narration to date, the book tells the story of a woman (known as M) who embarks on a 20-year quest to unravel the truth behind the violent death of her black neighbour, ‘Mad’ Annie. Inspired by the Stephen Lawrence Inquiry, which was set up to investigate the death of a black boy by a group of white boys, Minette exposes the horrifying consequences when communities ignore the people who need them the most.

Originally published in 1999, The Tinder Box has been reissued due to popular demand. A chilling tale of prejudice, ambition and cunning as villagers react to a brutal double murder, this was Minette’s first – and to date only – novella. It was commissioned for the Dutch “Bookweek”, when one author’s novella is given away with every purchase of books throughout Holland for a week.

The Breaker, published in 1998, was again enormously successful and became a number one bestseller in England, Australia and Germany. Set in Dorset, where Minette now lives, the book explores the tragedy of a woman who is drugged and brutally raped before being thrown into the sea to drown. While the Dorset coast forms part of the backdrop, the canvas is a narrow one, with only three suspects. Each one is portrayed in depth, and the solution to the brutal crime ultimately lies in deciphering the motivations that fuel their fateful actions.

The Echo went straight to Number 1 in London when it was first published in 1997. Set in the bleak environments of London’s homeless community, the book is an echo of the Oedipus story. An unknown man, with a troubled family history, wanders the wastelands of the old docks in the company of a child. Only when the man is found dead of starvation does the tragedy of his life begin to unfold. Abandoned by his parents as a baby, he has grown up to murder a stranger before marrying that stranger’s wife. When his wife hangs herself, he vanishes amongst the anonymous vagrants of London in search of redemption.

Minette’s fourth book, The Dark Room, published in 1995, explores the psychological results of family breakdown when secrets and secretive behaviour dominate relationships. The powerful tensions, created through the always absent figure of one of the major characters (Jinx’s father), who manipulates the action from a distance, gives the story a sense of impending doom.

When Minette’s third book, The Scold’s Bridle (winner of the CWA Gold Dagger Award), went straight into the bestseller lists on publication in 1994, she said: “Crime fiction is a very competitive genre with many excellent writers. Perhaps my books succeed because I concentrate on the trauma that exists within families and communities both before and after a murder is committed. Well-balanced families don’t kill each other…dysfunctional ones may. Because I explore family tensions, there is a greater sense of involvement for my readers.”

While waiting for The Ice House to find a publisher, Minette was already writing The Sculptress (published 1993). “I was never interested in creating a series character because I wanted to be free to tackle whatever I wanted, when I wanted, without being shackled to a particular person or place.” This refusal to follow the ‘rules’ of crime fiction has made Minette the most exciting and innovative writer of her generation, setting trends that other authors now follow.

The Ice House was published in 1992 by Macmillan after being rejected by numerous publishing houses. It won the Crime Writers’ Association John Creasey Award for best first novel and was translated into several languages within six months of initial publication. As with her subsequent books, The Ice House creates an atmosphere of claustrophobia and tension through Minette’s skilful depiction of a handful of characters whose personalities are neither totally attractive nor totally unattractive.

Where to buy Minette’s books in the UK: