I am a patron of numerous Dorset and UK charities, and because I believe that one should ‘act locally’ I always try to support my local Dorset charities, and the wonderful people who work so hard for them. The national and international charities that I regularly contribute to, because of the valuable work they do, are: 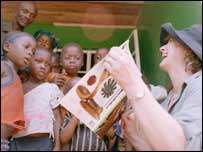 In April of 2004, I spent two weeks in Sierra Leone as the guest of Médecins sans Frontières. I was there to observe the advances that MSF has made in that country with its mother-child health initiative. I met with dozens of mothers and their children, and I even took part in an emergency Caesarean that helped save the life of a young mother. After my trip, I appeared on BBC’s Breakfast show to talk about what I saw:  Watch BBC Breakfast clip > >

I also wrote an article about my experiences that you can read on the MSF’s website: Cradle to grave in Sierra Leone. 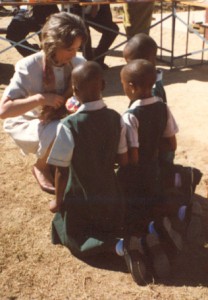 When I won the Crime Writers’ Association Gold Dagger Award in 1994 for The Scold’s Bridle, I donated the prize money to start a library project in Zimbabwe. My UK publisher, Macmillan, donated an equivalent amount of money and together we were able to stock several bush schools with library books for children, written in the local dialects. The photo below show me receiving gifts from some of the schoolchildren and reviewing the books the money helped buy. 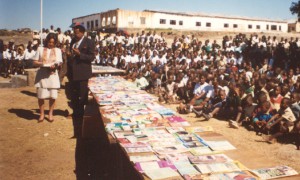